Kalman appointed a Member of the Order of Canada 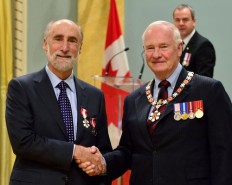 Hal Kalman was appointed a Member of the Order of Canada in December 2012. The Order, presented by the Governor General, ‘recognizes a lifetime of outstanding achievement, dedication to the community and service to the nation.’ Hal’s citation recognizes ‘his contributions to the preservation of Canada’s built heritage, as an architectural historian, practitioner and author.’ This has been a season of awards for Hal. He also received a Queen Elizabeth II Diamond Jubilee Medal and a Lifetime Achievement Award from the City of Vancouver – the latter ‘in recognition of his years of dedication to heritage conservation [and for bringing] a rigour and discipline to our understanding of heritage conservation.’