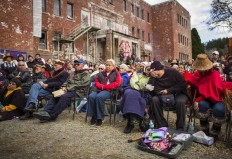 The ’Namgis First Nation in Alert Bay, BC, held a ceremony on February 18, 2015, to mark the start of demolition of the former St. Michael’s Indian Residential School. Built in 1929 and closed in 1975, St. Michael’s and all residential schools have come to be seen as being responsible for and symbolic of the dysfunctional aspects of First Nations communities. The Vancouver Sun reported that hundreds of ‘survivors and their supporters’ attended, partaking in prayers, songs and speeches that ‘honoured residential school survivors and those who have died,’ and throwing stones at the building ‘to release anger or pain.’

What a difference a decade makes. In 2004 the ’Namgis Band celebrated the school as a symbol of its strengths by using it as a valued community facility, which it called ’Namgis House. Led by Barb Cranmer, director of the adjacent U’mista Museum, and her brother, then Chief Peter Cranmer, the Band intended to retain and rehabilitate the building. The community recognized both the benefits and the evils of the residential school system. They commissioned Hal Kalman to prepare a balanced statement of significance, which noted that some former attendees valued their education at the school and ‘have risen to prominence,’ while others found it a ‘source of terrible memories.’ The Band also wanted the school listed on the Canadian Register of Historic Places, but a Catch-22 situation pitted provincial against federal regulatory jurisdictions and did not permit this. (The situation has not been remedied.) Over time the residential schools have come to be seen as representing only abuse, encouraged in part by the Federal Government’s formal apology in 2008 and the report of the Truth and Reconciliation Commission in 2015. Sadly, we have lost our ability to see the residential schools with any semblance of historical balance. (Photo by John Lehmann, The Globe and Mail)